I have heard a wise man say “Your actions speak so loud, I can’t hear what you’re saying”. In a world where athletes “talk” a good game, and waste energy “trash talking” opponents, it is refreshing to see one that lets their abilities do their talking for them. This week’s student athlete of the week is not much for words, but is big on actions, and even larger on character. He has positively impacted our school without saying much at all. He goes about his business with a workmanlike effort, and takes nothing for granted. This week’s Warehouse 3Nineteen Student Athlete of the Week is Senior, Miguel Sanchez. 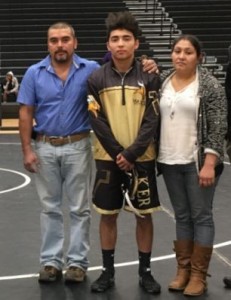 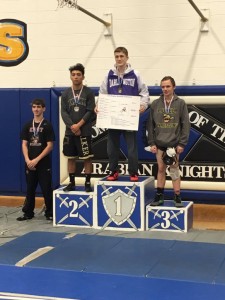 Miguel is a three sport standout, competing in Cross Country in the fall, Wrestling in the winter, and Soccer in the spring. Not only does he compete, but he does so at an extremely high level. Miguel has wrestled for four years, and has been seeded at the State Championships in three of the four. He is currently ranked #6 in 6A in the state of Alabama entering the State Championships to be held tomorrow at Huntsville’s Von Braun Center. Along with being a high level wrestler, Miguel has also qualified for the State Championships in Cross Country in both years that he has run. He has also help to lead Viking Soccer to back-to-back 2nd round appearances as a Left Wing scoring threat.

Miguel has had many fantastic experiences while at Walker. One of his favorite and most meaningful experiences can be credited to Head Wrestling and Head Men’s Soccer Coach Trip Otis. Miguel explained that Coach Otis provided an opportunity to serve their community through the Salvation Army’s Bell Ringing program. Miguel took a very valuable life lesson from this endeavor. He says “It caused me to realize that there are those who are less fortunate than us, and it is important to help people. I am glad that Coach Otis gave us this opportunity”. His greatest athletic memory at Walker also can be traced to his love for wrestling. He will always remember the first time that he qualified for the Wrestling State Championships (By the way, he has qualified at 120lbs, 132lbs, and now at 126lbs.).

When thinking about his time as a student athlete at Walker, Miguel will miss “the opportunity to continue playing sports”, but in characteristic fashion, he quickly says “I will miss the teachers as much as anything. They taught us about their subjects, but more than anything, they taught us about life”. It is that life, that Miguel has embraced, and that he has big plans for after he walks these halls for the last time.

Miguel will attend Bevill State in the fall and major in Automotive Technology. He has future plans of working in the automotive industry for a major automobile manufacturer.

If Miguel could offer any advice to younger athletes, he would tell them to “be dedicated in everything that you do. It will pay off in the long run, both in the classroom, and in athletics”. Miguel would like to thank “Coach Otis and Coach Strickland for all of the time that they have spent with me”. He gives them and wrestling a lot of credit for the young man that he has developed into.

We would like to thank Warehouse 3Nineteen for helping us recognize Miguel for the positive impact that he has had on our school and the community of Jasper. Go by and see our good friends at Warehouse, and tell them that the Vikings sent you!