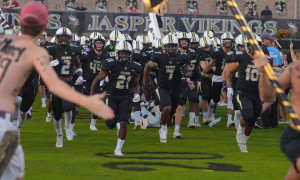 Leadership is not always loud. It is not always about attention, or being a star.  It is not about how big you are or how strong your are.True leadership is much more than that. it is about heart, and about moving people in the right direction. Machiavelli argued that it is greater to be a feared as a leader than loved. I would take the opposite position of that argument, because I have followed, and I’ve always worked harder for people that I love. Fear is in the brain, and love is in the heart. Human nature is to follow the heart. Leadership is about others following you, and following denotes that you are going somewhere. This week’s Warehouse 3Nineteen Student Athlete of the Week is definitely going somewhere, and in most cases than not, #21 is going very quickly. Ken Holiday’s teammates follow him because they love him, and he loves them back.

Teammate, and fellow team leader, Jeremiah Hammond has said that “Ken talks way more on twitter than he has ever heard him say in real life”, but Jeremiah adds, “even 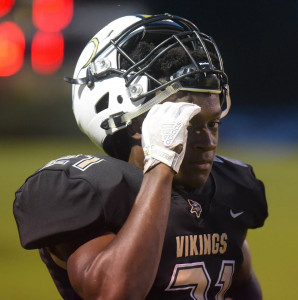 when Ken post something on Twitter, he is probably praising his Offensive Line for their efforts”. His tweets are never about his own accomplishments. Jeremiah said that “everyone loves Ken because he just goes about his business and takes the next handoff”. Offensive Coordinator Ryan Hall characterizes Ken as “consistent, he is the same guy every day”. Consistency is what many in our world lack. You know what you are getting with Ken everyday. There are no surprises. He is going to give you 100%, and then he is going to do the same exact thing on the next rep. 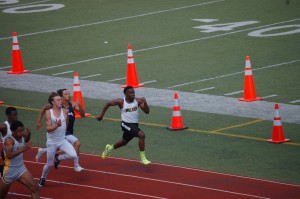 Ken is a Senior Running Back on the Viking football team, and also is a member of the Outdoor and Indoor Track teams. In Indoor, Ken runs the 60m dash, 200m dash, the 4X200 relay, and the 4X400 relay. In Outdoor, he runs the 100m dash, 200m dash, and the 4X100 relay. He has been a member of the football team for four years, and will earn his fourth letter in outdoor track later this Spring, and has been a member of the Indoor team in both years of its existence. Ken works just as hard at his academics as he does his athletic endeavors, maintaining a 3.3 Grade Point Average. Along with all of his co-curricular activities, he is in the praise band at Jasper House of Prayer as a drummer, and is a member of the Jasper High School Spanish Club.

Future plans are something that seem to excite Ken as he plans to become a Physical Therapist, after running track and majoring in pre-med in college. His number one choice right now is The University of South Alabama. He got interested in physical therapy after rehabbing a broken ankle during his sophomore year. More than any other future plans, his greatest prayer is that he will have a good family and be a strong husband and father. This might be Ken’s most admirable future plan, and he chose this for the most obvious of reasons, because he has seen the impact that a good father has had on his family. This is probably the same reason why his teammates love him so much and he loves them back- because he has been loved.

Ken’s parents are Ken and Takeila Holiday, and if you have ever been to any game, you have seen them, and Ken has seen them too. Family is very important to him. He says “they are always there, waiting by the locker room door, win or lose. They support me”. This support has always been huge to Ken. They have always believed in him, even when he says, “As a middle schooler, I didn’t even believe in myself”.  Ken’s dad is one of the greatest running backs to ever come through Walker High School (which is saying something), but Ken says that he is an even better dad. Ken has always dreamed of following in his dad’s footsteps. He doesn’t feel the need to compare stats against his father, and doesn’t feel like he is running to catch him in the record book, but if Ken could ever emulate his dad in anything, he wants to be the same kind of father.

Ken’s greatest memory as a high school athlete happened last season against perennial power Minor as he outraced the field for a 95 yard touchdown run. It was a huge region game with numerous all-state athletes on the field, and Ken ran by them like they were standing still. After a run that sent one crowd into hysteria and another into a hush, you know what Ken Holiday did? He turned around and handed the football to the official, he hugged the offensive line, and he got himself ready for the next handoff.

When thinking about his time in the Jasper City Schools, Ken says that he will miss this place. Being a Viking is special to him. Wearing the black and gold is important to him. He 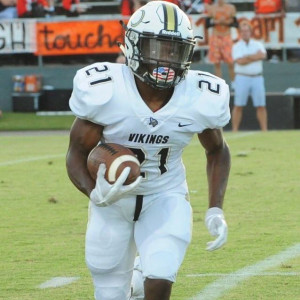 “will miss his teammates and coaches the most, because of the relationships that we have built, what we’ve been through, and the impact that we have had on each other’s lives”. Ken says that during his time here, that two teachers have had the biggest impact on his life. “Coach Hall always checks on me. He makes sure that I am doing right. He spends time with me, and he cares about me as a person, no matter if I run for 150 yards or 5 yards, it doesn’t matter”. Long time Viking Math Teacher, Mrs Meldra Poe has also meant a lot to Ken. “She is a great teacher. She was willing to tutor me or help me even when I moved to other math classes. She has gone out of her way for me. She taught my mom in college, so she has a vested interest in my well-being and improvement”.

If Ken could go back and give 7th grade Ken Holiday some advice, he would tell himself to “get in, and get your reps in practice. Don’t wait in the back of the line to run drills. Be confident in your abilities”. That advice could be very beneficial to anyone. No matter of your age, or what the game or goal that you are striving for. Waiting never made anyone better. You have to go out and get it, and believe that you can accomplish the goal.