Each week we will have an article for our “Wrestler of the Week”. This is an award for the wrestler who has held himself to high standards on the mat, in the classroom, or in the community. 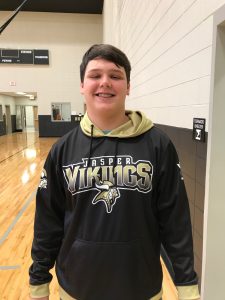 This week we would like to recognize sophomore Ross McWalters who wrestles the 285 pound weight class for the Jasper Vikings. Ross has been a member of our program for 3 years and this is his first year as a varsity starter. He has continued to improve since he joined the program. Ross weighs 230 pounds and is undersized for his weight class. He is sometimes outweighed by 50 pounds.  Even being undersized, Ross has built a 6-2 record since the beginning of the season. He also avenged a loss to a former opponent this week. Ross enjoys hitting big throws and upper body attacks which been evident in his matches. For this reason, Ross McWalters is our wrestler of the week.

He and the varsity team will be competing this weekend at the Gardendale Invitational. Please come out and support the team. If you’re unable to attend, follow the Jasper Wrestling Team on facebook (Jasper High Wrestling) and twitter(@JasperALWrestle) for updates. Thanks and Go Vikes!

Away vs Pelham, Mountain Brook
5:30 pm
View All Events