After finishing last season as the Alabama 5A State Champions and ranked in the top 50 nationally by maxpreps.com , Viking Volleyball, under the leadership of Coach Bobby Daniels is back to their winning ways. Currently with a record of 24-2, the Vikes are listed as the #1 team in the state according to al.com and its weekly volleyball poll, who say, “The Class 5A top-ranked Vikings are the most complete team in the state with power, ball control and solid defense”. 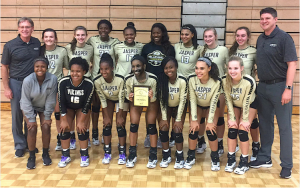 Jasper, who was ranked as high as 30th last season by MaxPreps.com in its national poll, just received notice that it has received another national ranking. The Vikings were ranked 78th this week by PrepVolleyball.com , a national volleyball publication out of California. Prep Volleyball heaped high praise on the Vikes in their description of this year’s team, “The Vikings won 70 times last year en route to the Alabama 5A title. Led by versatile talents McKinley Ferguson and Alex Oliver, Bobby Daniels’ team is off and running again in 2019. Jasper won the Choo Choo Classic Tournament in Tennessee and is crossing state lines again this weekend to compete in the Back2Boro in Murfreesboro, Tennessee”.

We should know more about our team following this weekend’s tournament in Murfreesboro, Tennessee. In pool play, Coach Daniels and the ladies will see Father Ryan High School (Nashville), Wilson Central High School, and Brentwood High School (who is currently ranked 36th in the country and #2 in Tennessee behind Briarcrest Christian according to MaxPreps). The tournament will also include top teams such at Siegel, Cookeville, Nolensville, and Houston, all out of Tennessee.

We enter this weekend after wins over 7A #3 Hoover, 5A #7 Lawrence County, Russellville, Northridge, and 7A #9 Vestavia Hills in the past two weeks following our Choo Choo Championship.

Make plans to  catch the #1 Ranked Vikings in action as they travel to Hoover on Tuesday of next week, and host home matches on Thursday in a tri-match with Dora and Brewer.