It is very difficult to stand out as a big fish in a big pond. What about a big fish standing out in the ocean? We have a student that has been able to set herself apart from others no matter the environment that she has been placed in. She has been considered as the best of the best in anything she has ever attempted. She has done so through hard work, dedication, determination, and one of the most competitive natures that you will ever see. She has been recognized by national publications as one of the top volleyball 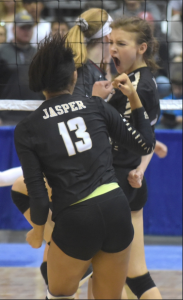 players in her class. She has been named to the AHSVCA all-state team on three different occasions already, and has been included as an al.com Super All-State player twice. She is a member of the FBLA, Beta Club, and National Honor Society. She currently carries a 3.8 Grade Point Average, and is a leader in our school. She might not be the most gifted athlete or student in our school, but no student in our building is as competitive as she is, and no one will outwork her. She is competitive on the court, but is just as competitive in the classroom. The week’s Warehouse 3Nineteen Student Athlete of the Week is McKinley “Lou” Ferguson.

McKinley is the daughter of Sandi and Greg Ferris. They have helped to build her work ethic and competitive nature by how they have raised her. Sandi was a standout athlete at Walker High School, and several people have said that McKinley’s demeanor is very similar to hers. McKinley has had a very successful academic and athletic tenure at Jasper High School, but the impact that she has had on others is immeasurable. Along with her stellar marks in school, McKinley was named MVP last fall of the 5A State Volleyball Finals, and North MVP of the annual AHSAA  North/ South All-Star game this past summer. When McKinley is placed in groups, her competitive nature always rises to the top, and to put it plainly- It makes her who she is.

Jasper High School Head Volleyball Coach, Bobby Daniels, summed McKinley up probably better than anyone else could. Coach said, “She has a great passion for the game of volleyball. She is the ultimate competitor, and she is the ultimate team player. Whatever I have asked her to do, she has always done. These are the qualities that make her so special”. 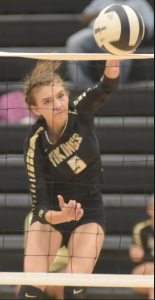 Lou’s most favorite memory at Jasper was “winning the volleyball state championship. The feeling of all the hard work you and your team put in during the season and it finally paying off” was a feeling that she will no doubt cherish forever. With all of the lasting memories that McKinley has been a part of, she thought about what she would miss most when she walks out of these doors for the last time. She says, “what I’ll miss most about Jasper are my teammates and the bond we share. They aren’t just my teammates, they are like my sisters. We haven’t just become a team but family, and I’ve built life long friendships. I’ll also miss track. The coaches are so motivating and caring, they push me to do better each day during track season”.

Her future plans are to play Division I Volleyball at Kennesaw State University. She is currently uncertainof her academic major, but her ultimate goal is to become a travel nurse. It is something that she has been interested in for a while. With her work ethic and competitive nature, I would go ahead and chalk it up as a strait sets win….. McKinley Ferguson (3)…… Nursing School (0).

When asked what advice that she would like to offer a younger student athlete, McKinley is very honest and the reflective nature of her comments are easily apparent. “Enjoy it. Enjoy every rep no matter how hard or challenging it is. Always give 110% effort; it will pay off. Keep your head up and always encourage your teammates. You will make mistakes. No one is perfect, so shake it off and try again. NEVER let someone tell you that you can’t achieve something because if you put the work in then you can achieve whatever you set your mind to”.

McKinley was given the opportunity to talk about the teacher or teachers who have had the greatest impact on her life. This opportunity was one that she seemed to enjoy. The chance to talk about what others had done for her. She says, “Mrs. Robbins was my 11th grade English teacher. She always held my classmates and I to high standards. She always listened and was open minded to us. You could tell that she cared. Coach Phillips was my 10th grade Geometry teacher. He also pushed 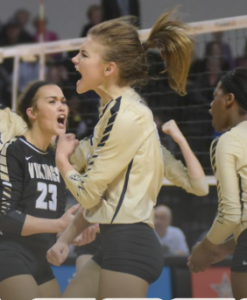 me to do my best and always helped me. Coach Hobby was my Spanish I teacher, and she was there if I needed someone to talk to. She always gave me advice when I needed it and motivated me to do my best. Mrs. Kitchens, my current Pre-Cal teacher says good morning every morning. She always asks me how my games went. She listens to her students and is very helpful. She shows that she truly cares, and that means a lot”.

McKinley has impacted the lives of many students and teachers at Jasper High School and because of that, she seems to realize those who have had the greatest impact on her life. When asked who she would like to thank, she so eloquently stated, “I would like to thank God. He has a plan for me and I will keep the faith and let him guide me. I want to thank my two wonderful parents for always motivating and pushing me to be and do my best on and off the court. I want to thank my other family members and friends who have supported me. I would also like to thank my coaches and teammates for pushing me to do my best and play my hardest. I want to give a special thanks to Temperance Chatman for being the greatest friend that anyone could have and for always being by my side”.

We would like to thank Lou for helping to change our school. She has helped to make us a school of champions. Her competitiveness and grit have willed our school to its current place among our state’s best (academically and athletically). Jasper High School is a better place because McKinley Ferguson is a part of it. Thanks to Warehouse 3Nineteen for helping us to recognize McKinley and all of our other Viking student athletes.  Go by and see our good friends at Warehouse. Tell them how much you enjoy the articles!