The Vikings won the Austin Hamer Memorial Tournament hosted by Moody High School. Jasper went into the consolation finals and Championship finals sitting in 2nd place. They had 10 guys wrestling for medals with 8/10 winning their matches(1 of those loses were against a teammate in the finals). Huge accomplishment for these guys. 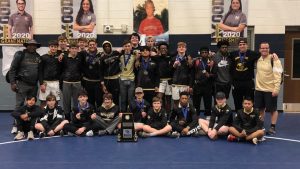